Weathering is the chemical alteration caused by the atmospheric water in vapor and/or liquid form, due to the reacting agents carried in solution. Thus, this was the first step in the alteration of the original consolidated rocks forming the initial land masses. Figure 29 shows how the most reactive minerals are preferentially affected. Also, the less soluble materials of the weathered rock will precipitate in the immediate vicinity, along fissures and/or bedding planes through which the water percolates.  For example, the manganese dendritic growths frequently found on bedding planes and joints (fig. 30). These differential weathering characteristics can also be noticed in the variability between two different members of a rock outcrop such as in figure 31, where a dolorite dike is totally weathered away and the limestone through which it intrudes, being more weather resistant remains unaltered, thus causing a very sharp topographical contrast. The above example is rather exceptional, because more often we have reasonably flat areas with uniform rock outcrops where the weathering is widespread, giving rise to the development of soils. In this respect it is interesting to identify an ancient soil (paleosol) preserved within a stratigraphic sequence.

A very good example of a paleosol is shown  in figure 31B where on the right hand side, the lowermost member of the succession has a blotchy wine colour,  corresponding to a completely weathered basalt layer. That is, this is an ancient soil, which is covered by a layer of very angular rock fragments and above that we have a layer of almost unaltered lava. I present this example first because it shows very well how a soil horizon can be preserved within the rock column. More, the blotching indicates a mineral assemblage with different chemical compositions, and if this weathered material had been transported, the blotches would have disappeared due to the mixing.  Thus,  we have an “in situ” paleosol. The weathering caused an enrichment in iron, giving rise to a laterite, and if this laterization had been more intense, the iron concentration could have been considerably higher (figs. 31C and D). Note that if the original rock had been rich in aluminium bauxite would have formed. 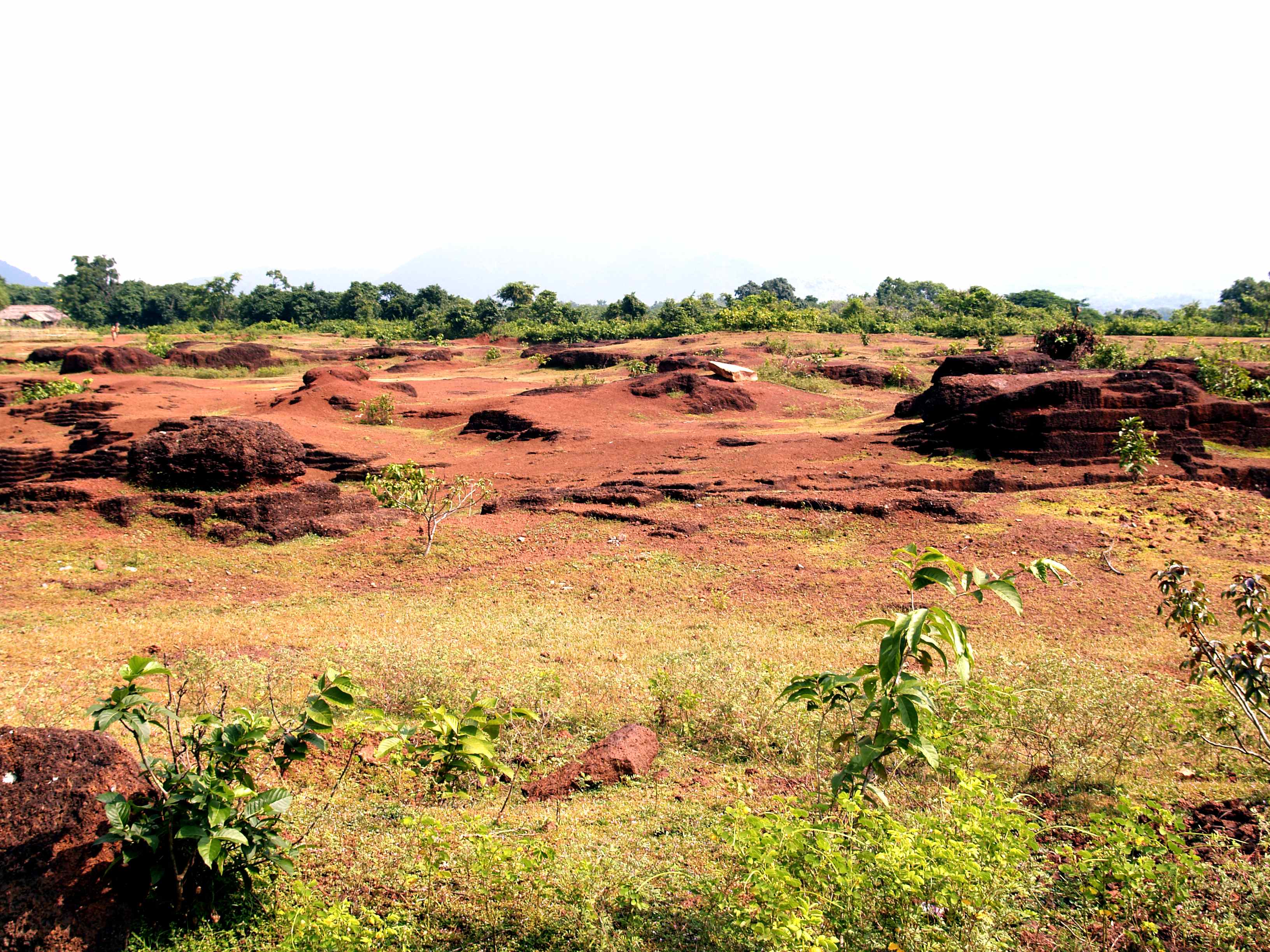 Figure 31C – Laterite field, rather barren compared to the lush vegetation in the background (Orissa, India). 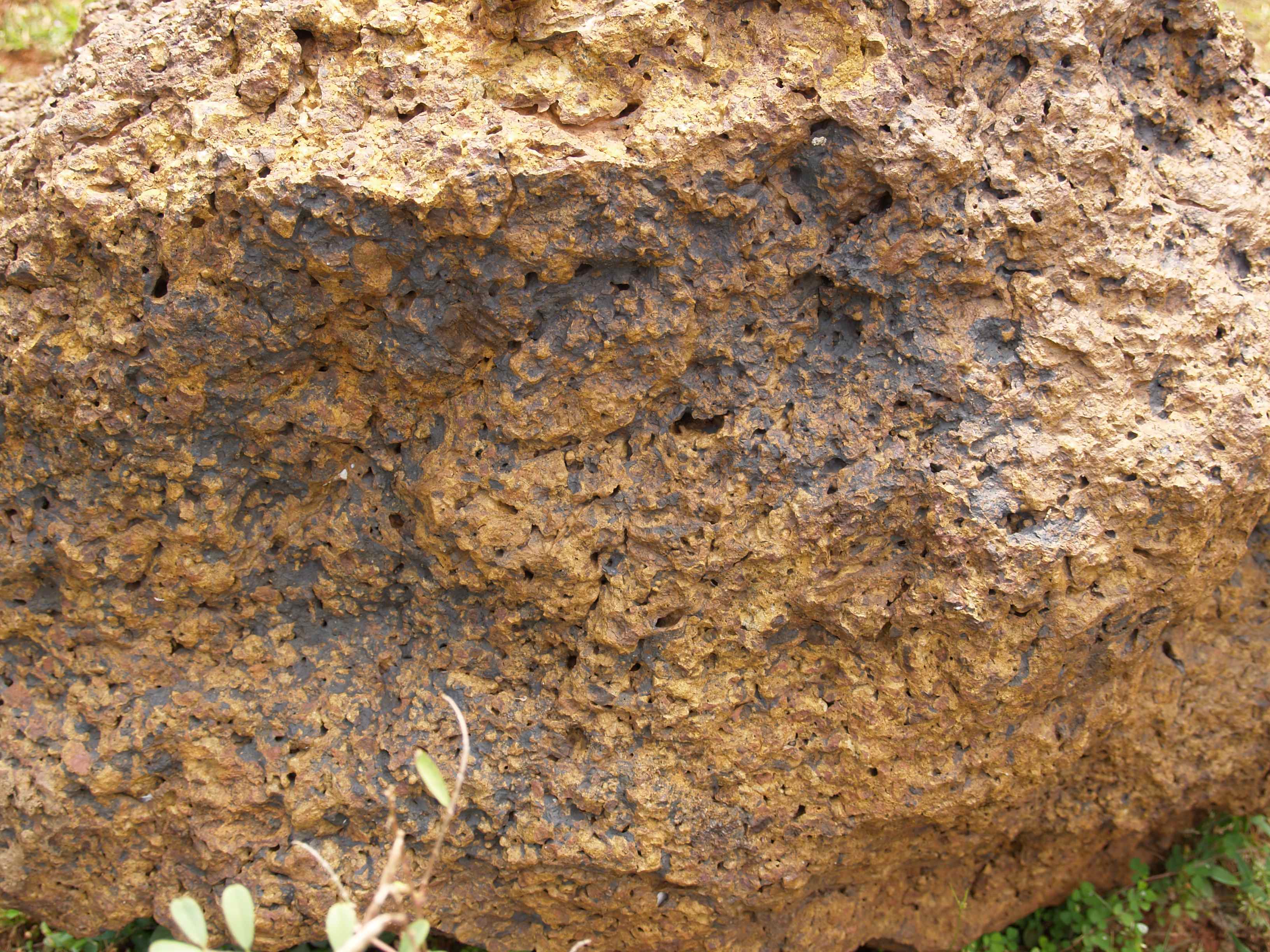 Figure 31D – Close up of the laterite (Orissa, India).

Continuing with iron, depending on the acidity of the water, the iron originating from rock weathering, may be dissolved by the infiltrating waters, and transported to the water table. With a change on that groundwater’s acidity level, the iron oxide may precipitate at varying depths within a soil profile, generally as irregular thin limonite rich layers (fig. 31E), 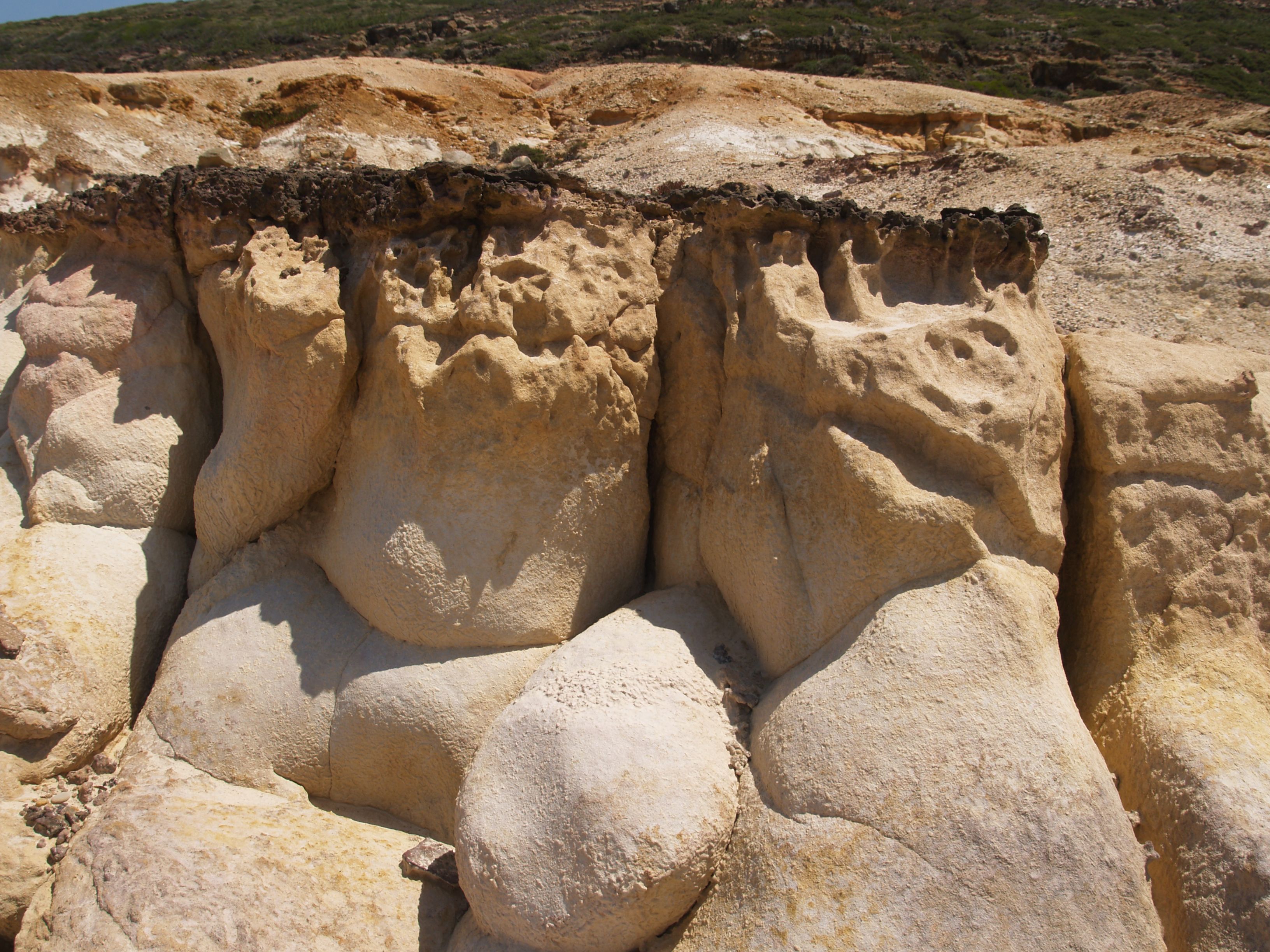 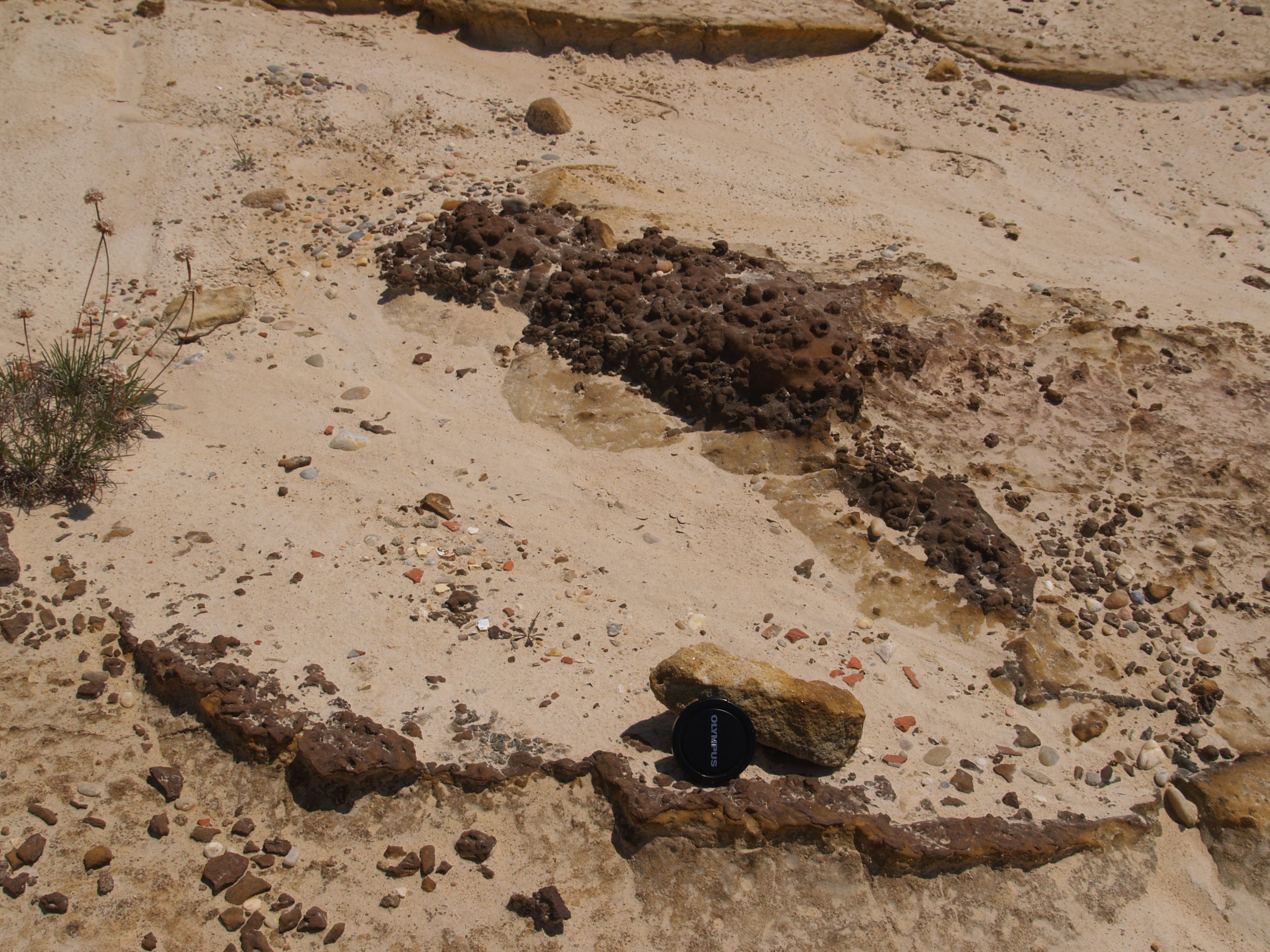 Figure 31F – Close up of limonite crust with a pisolitic texture (Vicinity of the Lizandro River mouth, Portugal).

Within arid soils, calcium carbonate may precipitate, forming nodules which may coalesce into a dense, hard, resistant layer of calcrete when the environmental conditions remain constant for a sufficiently long period (fig.31G). 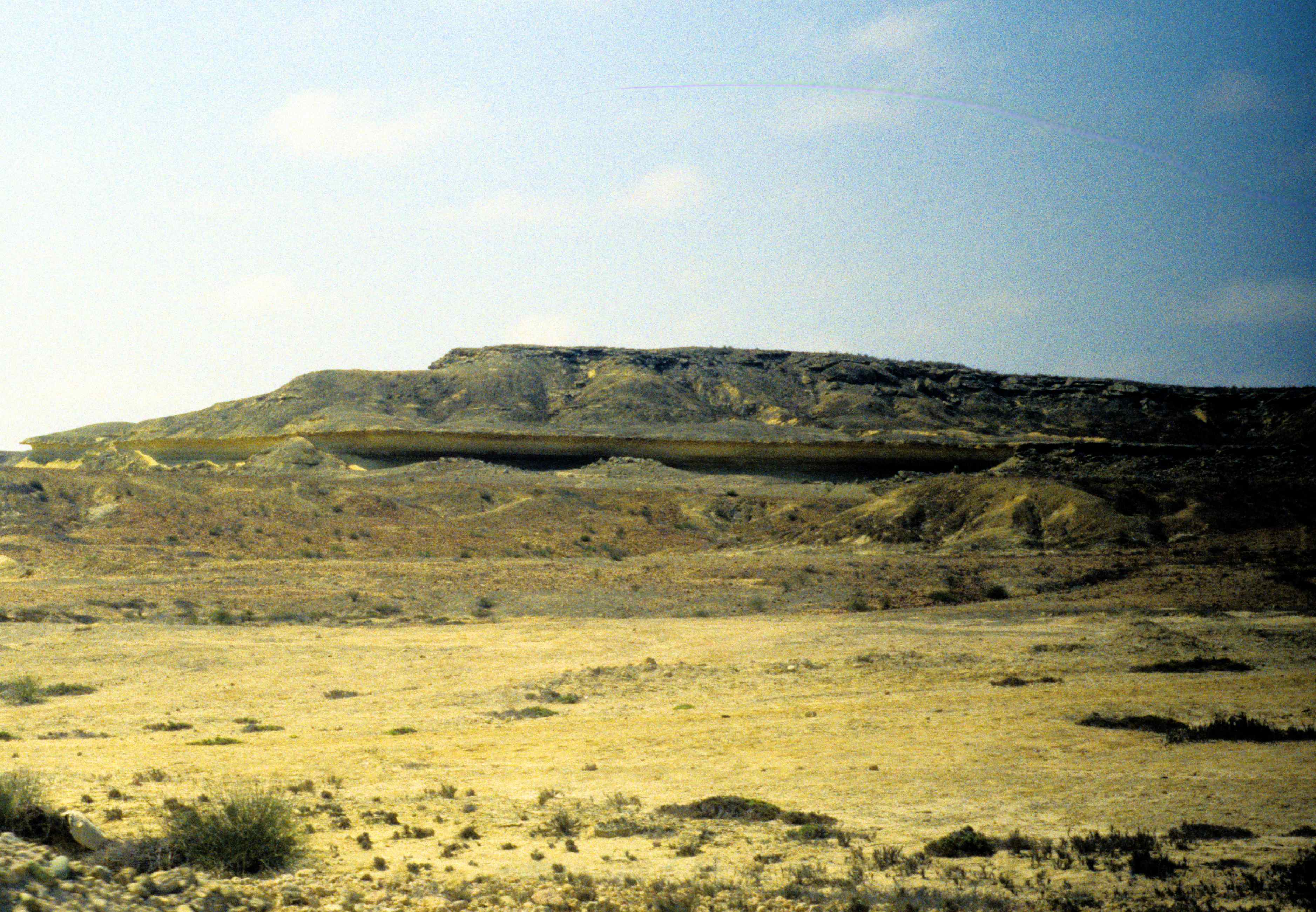 The difference in reactability of the various minerals constituting a rock gives rise to interesting surface features. One such case is the formation of cup shaped holes on granite outcrops at mountain tops, known as gnammas (fig. 31H). I presume these remarkably circular depressions are caused by the weathering of the feldspars and other chemically unstable minerals into clays, initially in single rain drops size cups. This because in winter, the snow or the freezing rain drops will fragment the mineral lattice, which will then become much more susceptible to weathering when the water melts. With the continuation of this cycle, the clay formed by the weathered minerals, being very light, is washed away, enlarging the cup and exposing additional surfaces of fresh rock. In the mean time, the much more weather resistant quartz grains present get loosened and acumulate at the bottom of the cup as shown in the picture. When the rain is stronger, these quartz grains will also be washed away, thus allowing the continuation of the enlargement of the cup, which can eventually reach significant dimensions like the ones at Marinieche in France, as was shown to me by Jean Jacques Espirat, another geologist. In fact, after his communication, I changed my mind about a depression in a granite boulder, with a mouth diameter close to 2 meters, which I photographed in the vicinity of the Orange River at the Agrabis Falls area, in South Africa (fig. 31I).

I had originally interpreted it as being a river pothole, at a site which, although with an elevation somewhat higher than the present river bed, I presumed it was where the river previously flowed. Perhaps another point in favour of this new interpretation is the fact that river potholes tend to be deep and have a proportionally narrow mouth, as against these weathering cups which appear to be shallow and have a relatively large mouth.

The larger the surface area being affected by the weathering, the more effective it will be. That is, the more cracked the original rock, the sooner it will become weathered, since the cracks greatly increase the area exposed. Cracks develop, for example, due to the influence of the temperature variations from night to day, causing consecutive expansions and contractions. Along these cracks the weathering will have a larger surface of impact and it will often form troughs. This is well demonstrated in figure 31J where the weathering effect on a gray limestone has such a similarity to the skin of an elephant, even the colour, that in South Africa this type of weathering is known as “elephant’s hide weathering”. Much better defined cracks (joints) develop when buried rocks are released from their surrounding pressure. Mining for example, when the ore and associated waste is extracted, relieves the surrounding rock body from its original tension. Figure 31K shows the cracks developed by the pressure release caused by the mining of this dunite pipe. Further, the humidity that concentrated along these cracks, accelerated the weathering causing the alteration of the dunite into magnesite, which now frames the joints so distinctly. 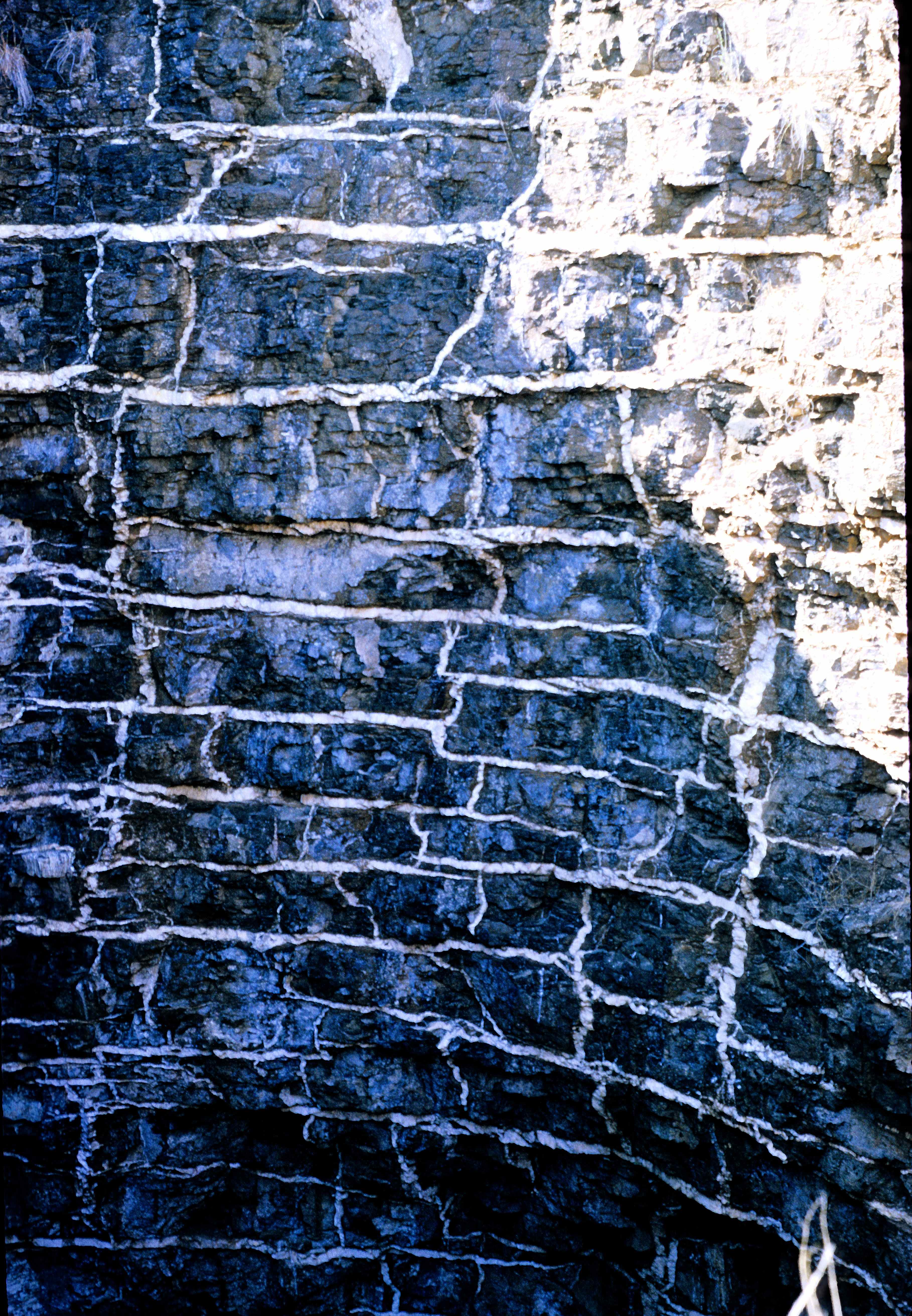 It also often happens that the joints could have been previously filled with a more resistant material, in which case they will tend to form ridges (fig 32), giving rise to a surface texture with the obvious name of box-work, which comes in all sizes and is quite noticeable in limonite rich sediments (fig. 33). Another example is the spectacular weathering sequence initiated with the alteration of olivine to serpentine (fig. 34). This is followed by a marked increase in the box-work texture, and the alteration of serpentine to breunerite (fig. 35). On a much grander scale, are the joints formed during the uplifting of rock masses caused by isostatic adjustment. A good example is seen in granite outcrops. Granite is formed at great depths and thus at very high pressures. Erosion will eventually bring these large igneous rock masses to the surface reducing dramatically the surrounding pressure and causing them to break into large blocks. Since the weathering will be most intense at the block corners, these, with time tend to become rounded and the decomposition more concentric, causing a pealing effect like an onion (exfoliation). This is well illustrated  in figure 36. where one can see examples ranging from blocks with barely rounded edges, to blocks that are almost spherical and blocks where the exfoliation is quite distinct. On a granitic land surface, this can be seen in a grand scale, because it gives rise to the very characteristic geomorphology of upstanding huge egg shaped solid boulders, known as inselbergs  (fig. 37). Figure 37 – The most famous inselberg in the World (Sugar Loaf – Rio de Janeiro).

But, on the granitic land surface shown  in figure 38, a very unusual effect of the decompression and enhancement of the exfoliation by weathering is apparent. The boulders resemble piles of pancakes. Most likely this lamination effect was caused by prior strong shear pressures on the granite mass. Perhaps the most devastating weathering effect, is the one giving rise to sink holes. In acidic waters, limestones and dolomites are incredibly soluble rocks and thus very easily weathered. The effect on outcrops, termed “karst”, gives rise to a very irregular surface with rather deep hollows (fig. 39). This weathering action continues under the surface anywhere above the ground water table (vadose zone). Thus, where the water table is sufficiently deep, the limestone will continue dissolving above that and caves will form (fig. 40). Figure 41 shows the difference between solubility levels. Notice the marked contrast between the very weathered, soluble, limestone bed, above, and an insoluble chert horizon below. If the conditions remain constant for long periods, the weathering of the limestone will continue, the caves will increase in dimensions, reaching a stage when the ceilings, generally in the form of a vault, will no longer support the mass of ground above, and will collapse, forming sink holes. Even small sink holes can cause significant damage like the one shown under the railway line in figure 42. On the other hand, particularly interesting is the double sink hole shown in figure 43, where initially the dome collapsed, but somehow its central sector maintained its shape, to eventually disintegrate at a later stage. For a matter of scaling, the markings on the right side of the photo are car tracks. In the mining town of Carletonville, South Africa, the Witwatersrand Group with its famous very rich gold horizons is overlain by a very thick dolomite succession. In 1978 when I worked there, there were 4 deep gold mines which pumped to the surface in excess of one million cubic meters of water per day, in order to maintain the underground workings sufficiently dry to enable the mining operations.  As a consequence, the ground water table (phreatic level) dropped tremendously in some places to more than 500m below surface, causing the development of large areas with perfect conditions for the formation of caves which naturally progressed into numerous sink holes. This eventually led to the evacuation  of a few of the mining villages, because of the collapse of some of the constructions and the unfortunate death of some of the inhabitants.

Much more frightening though, is what occurs in Slovenia where the village of Skocjanske (fig. 44), is located on top of arch remnants separating old sink holes (fig. 45). Having lived in Carletonville, I do not understand how a village can continue being inhabited under such conditions. This entry was posted in Geology, Sedimentary Rocks, Weathering. Bookmark the permalink.